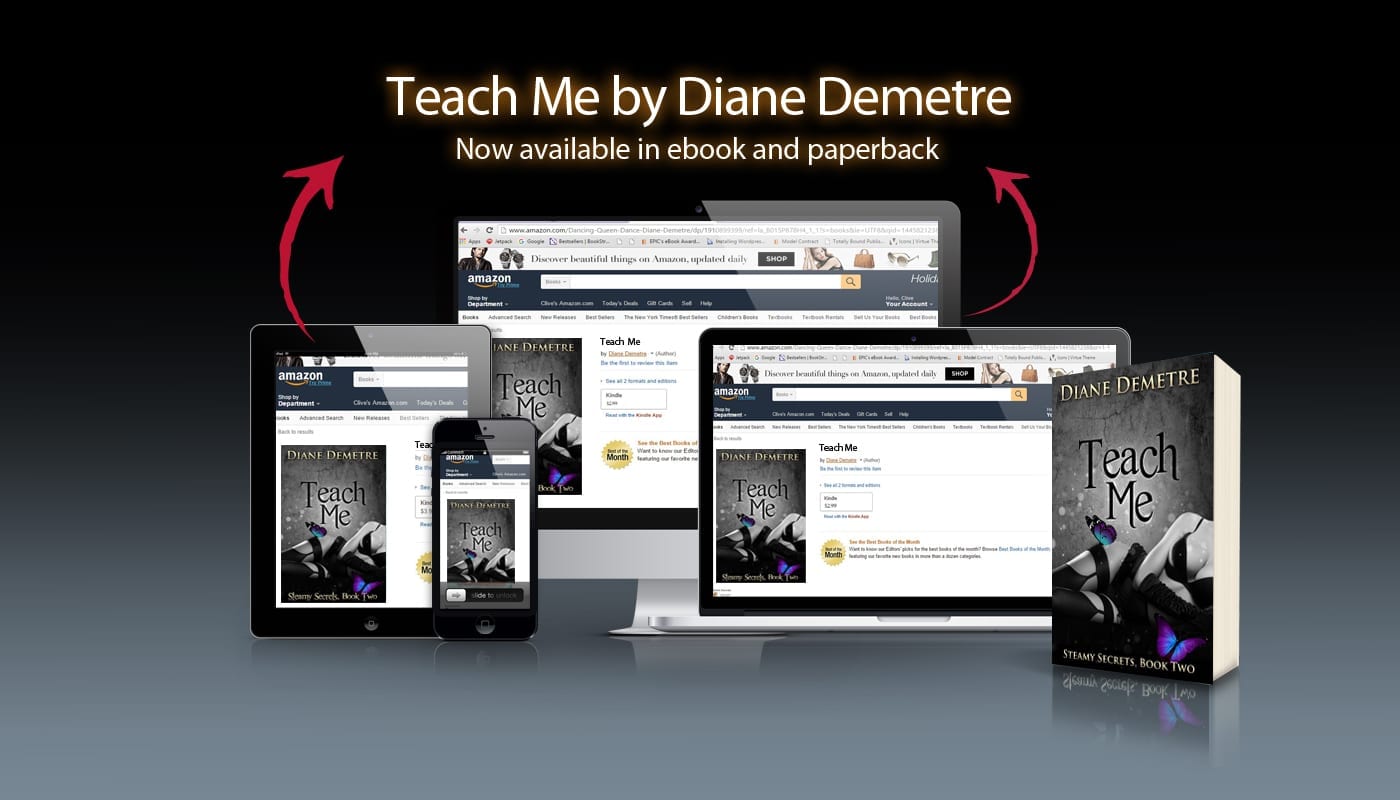 Buy Teach Me and be taught a lesson today!

When destiny beckons, what is a girl to do?

At twenty-four, Samantha O’Brien scores her dream job as a dancer at the famous Moulin Rouge, only to arrive in Paris to find her well-laid plans in disarray. Fortuitously, Sam is rescued by the eccentric, tarot-card reading proprietress of Hotel Hollandaise, who cautions that Paris is for lovers, but not always love.

As Sam launches into her new career, she suspects that the show’s super sexy, Sicilian stage director, Tony Di Falco is more than just a creative genius and hard taskmaster, leaving her to wonder whether secrets are best shared.

Meeting Philippe Lacroix, a struggling, young artist in Montmartre saves Sam from imploding under the pressure. He introduces her to the city of love, captivating her with his angelic good looks and sensuous touch. Yet the mounting attraction intensifies between Sam and Tony, and their tense, sexually-charged relationship threatens to overwhelm them. But the show must go on.

Filled with backstage bitchiness, tough rehearsals, a sprinkling of cocaine and the French addiction to cigarettes, Sam grapples with her new life. Then without warning, her destiny changes literally before her eyes, and she learns that even in the most romantic city of the world, you don’t find love, love finds you.

Reader Advisory: This book contains a sexually awakening heroine and willing men to teach her the ways of the flesh. Casual sex scenes with recreational drug use.

Praise for Teach Me

Julia

Goodreads
Read More
This book took me on a first class adventure to Paris and surrounds – all from the comfort of my favourite reading chair, no passport needed. The sights, smells, sounds of Sam’s Paris, so wonderfully described, it is the cherry on top of this beautiful love story. Not to mention the back stage access to one of Paris’ hottest venues – Moulin Rouge! Conquering her demons to follow her dreams, Sam will become your new best friend. Through love and loss, cheering and cheating, Sam keeps her desires alive no matter the moral or physical challenges. The city of love does not disappoint, nor does the ‘man book candy’. Teach Me is full of weird and wonderful characters you will love as much as I did. I’m now so eager to read books 1 and 3, to fill in the gaps and go on another exotic ride!

Robyn Powers... Fantastic read anywhere!

Goodreads
Read More
Samantha O’Brien is a young dancer set to make the big time at the Moulin Rouge but arrives to find things aren’t all that glossy and glamorous at the cabaret. First there is the ultra-sexy director Tony Di Falco who I loved. What a scorching hot man he is with his great bod’ and backstage secrets. Then there is the young artist Philippe, who Sam falls in love with. He has secrets too, but not what you expect. One of my favourite characters was Madame Lucette. She keeps reading Sam’s tarot cards and what she discovers makes a terrific link to the story. Then there is the visit of a couple of characters from Diane’s first book, Tempt Me who give familiarity and further depth to the story. Of course, there is a twist at the end which is what this author promises and she delivered again. What I like best about Diane’s work is that it is different to the usual angsty, predictable erotic romance and it includes great dance and sex scenes. I look forward to the next book.

AusRom Today

Goodreads
Read More
Hot off the heels of having loved book one in Diane Demetre’s erotic romance series, we had high hopes for this second novel and it certainly lived up to our hopes and expectations. The story revolves around Samantha who has scored her dream job as a dancer at the Moulin Rouge but soon finds out that even the best laid plans don’t always work out as we hope. Whilst in Paris, she is met by an ensemble of characters, all of whom are well developed and suitably nuanced to fit into the highly creative and tough lifestyle of the most famed cabaret dancers in the world. Additionally, Demetre paints vividly the atmosphere of Paris and the Moulin Rouge with such detail that it adds yet another layer of intimacy to the story. A wonderful read that we highly recommend.

T Costa... Fabulous!!!

Amazon
Read More
I was not disappointed with this sequel. Captivating from start to finish. Bring on book 3 please.

Dianne

Goodreads
Read More
I loved this novel that I won in a goodreads giveaway. It was supposed to be for my mother (oops!), but arrived here instead. It was a wonderful story, well written, realistic, funny, emotional characters. Samantha has a dream and nothing is going to get in the way of realising it – except life of course! Diane Demetre has created an amazing world full of believable, relatable, human characters who jump off the page and grab you taking you along for the ride and leading you to a great ending! Happily recommend to anyone who enjoys a fabulous and sexy story!

Anne Meyer

Goodreads
Read More
This wonderful story took me through the streets of Paris into a world only the selected go. I anxiously waited until the end of each day for my reading time. I fell in love with the characters, fell in love with the dancers and felt devastated when I finished the read. But then the third book was released and my anxiety was replaced with bliss…….the entire series are must reads…I am anxiously waiting for this superb author to release a new read. Bravo Diane Demetre..

Berveine

Goodreads
Read More
I loved reading this book. It was so entertaining and easy to read page after page. I was simply enthralled! As for Sam, well what a life, what a talent and what an adventure. I’m about to start my next book by Diane Demetre I just love her writing and its style.
Previous
Next